How to Choose a Small Outboard Motor
for a Dinghy

Less Horsepower and Lower Weight Might Be the Better Compromise

Cruisers have it backwards. First they buy a dinghy and next buy a small outboard motor sized to wring maximize performance from that dinghy. The boat leaps on plane and at wide-open-throttle scorches the water. But there is a serious downside.

That's because knowledgeable cruisers never tow a dinghy during a passage. Which in turn means wrestling the 9.9-hp outboard up from the dinghy, over the sheer and into the cockpit, and too often with two to three foot seas slamming you from side to side. With that reality in mind I ask the salient question: Would you rather wrestle with a 40- to 60-pound outboard, or a 100-pound outboard? The difference in weight is more substantial than the numbers appear at first blush. A 2.5-hp outboard up to about a 6.0 horsepower outboard is significantly easier to wrangle than an 8-horse or a 9.9. 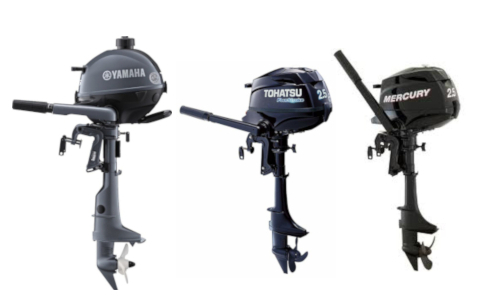 Admittedly, you will pay a penalty in performance when powering with a 2- or 4-horsepower outboard motor. It is doubtful you will be able to get up on plane, maybe with a Doel Fin or its worthy competitors. It's no secret that a small outboard motor rated less than about 20-percent of a dinghy's USCG rating will not run fast. Even if it does climb onto plane, the bow rise during transition is hazardous. You'll be blind to whatever is in front of your for several seconds. So slow down. Be happy. Hey, you're already in paradise, what's the rush. A tiny two-horse can move a ten foot RIB at two or three knots, faster and easier than rowing. Another plus, the smaller the outboard motor the less storage space it takes up.

Besides a lower weight, smaller outboard motors cost less to purchase. Also extended service contracts are less expensive for a smaller outboard motor. Whether or not you'll save on fuel is debatable. Comparing apples to apples, at no-wake speeds a 2.5 will get about the same mileage as a 9.9. On the downside, a slower boat means longer passage times from the mother ship to the dockside restaurant, or an unacceptably long haul to explore a secret cove. But for many that's a compromise well worth enduring.

Finally, there's the art of the deal. Depending on the locale, smaller motors are often discounted for the simple reason dealers must stock a certain number of small outboard motors in order to get a bigger allotment of V-4s and V-6s. That's where dealerships and outboard motor manufacturers make their big money. Conversely, other times the particular small outboard motor you want may be such a red hot seller that you have to backorder one and there will be no discount.

Comparison shop not only brands, but also dealerships. Don't forget the internet. Warranties are another critical issue. Most four-stroke warranties run for a term of three years. But special deals come and go with the seasons, offering special warranty extensions or extended service contracts included for no extra cost, or for very little money. Just as important as purchase price is the dealership and its service center. How is your rapport with the service manager? Are the technicians up to date on the latest diagnostics? Ask to see credentials. Is the shop neat and orderly. Finally, maybe it's smarter to buy an outboard you're strong enough to wrangle and then find a boat to fit.

Author Timothy Banse has published articles in Popular Mechanics, All Chevy, Pickup Van & 4-Wheel Drive, Mecanica Popular, Motor Boating, Yachting, Mar y Vela and many other magazines and newspapers from around the world. He writes about cars, trucks and tow vehicles and marine-engine technology.

How to Keep a Small Outboard Running

How Fuel Will My Outboard Burn?